The big band comes back to Town

The Ebenezer Centre Steering group would like to thank all those who attended the Gala evening at the Centre celebrating the 5th anniversary of the opening of the Centre, with a performance on stage of the Gethin Liddington’s High Society Big Band featuring guest singer Sara Meek.

The two sets were made up of 25 big band titles of old favourite of arrangements dating back to the good old dance band years. These included ( Intermission Rift, 920 Special, Little Brown Jug,) and many more.

The musicians set a very high Standard under the leadership of Gethin Liddington who himself played a very mean Trumpet. It is difficult to pick out any one performance but one that stood out was the drummers piece SKIN DEEP made famous by Gene Krupa, in this case excellently performed by Paul Shepherd.

The guest Singer Sarah Meek earned huge applause for her vocals including “As long as he needs me”. “Embraceable you”, and “You go to my head”. Certainly a singer to look out for in the future.

You cannot leave out one of the top Pianist in Wales at the moment – Richard West.. who has performed at the centre on a number of occasions, He once again showed off his skills on the keyboard 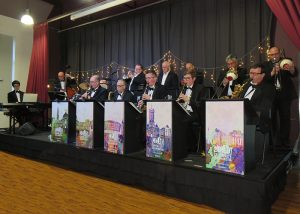 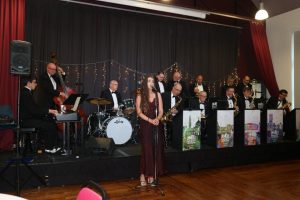