Warning: A non-numeric value encountered in /homepages/17/d364898711/htdocs/Ebenezer/wp-content/themes/Divi/functions.php on line 5480

In 1740, Edmund Jones came to Pontypool from Ebbw Vale where he had been assistant pastor at Penmaen Church. He and his wife Mary took a farm at the Tranch and started preaching in Pontypool. Ministers without a church would use a building in town called the Old Japan Warehouse, a pulpit was kept there for ministers to preach on a Sunday.

Edmund took a very small salary, so to supplement this, his servant would go to Pontypool on a market day and stand outside the old Corn Market. She would lay a basket on the ground and announce that she was the servant of the Rev. Edmund Jones. People would put eggs, cheese and other provisions into the basket for the minister.

Meetings were held in local farmhouses. Numbers increased, so it was decided to build a church. One morning, while walking from Cwmfrwdoer to Pentrepiod, Edmund stopped on a patch of land near the road to listen to the birds singing. He decided that this was a suitable spot to build a church.

The congregation were mainly hill farmers making only enough money to sustain their families. Edmund appealed for help from other churches and he gave £30 of his own savings to start the building. He also added another £15 from the sale of his own personal library to complete the building in 1742. When the time came to name the church, Edmund (Who was known as the Prophet Of The Tranch,) declared that the man to follow him will be named Ebenezer, It was decided to name the church “EBENEZER”.

A DESCRIPTION OF EDMUND JONES.

Edmund was described as being of middle size, of sturdy build, with penetrating eyes but with the dignity of an apostle. He spread the gospel by the way he lived rather than by his preaching. He was not a great orator, his voice was rather feeble, but he was a man of great strength of character. His fame as a preacher and prophet spread throughout Wales. He was also a very generous man who never worried about money and often gave what he had to the poor.

Among his friends was the Duchess of Huntingdon, Howell Harris and George Whitfield. While staying one day at Edmunds house, George Whitfield noticed the happy marriage that Edmund and Mary enjoyed. He was so impressed he said it helped him to make up his mind to marry a Mrs. James, a widow from Abergavenny. He later remarked to a friend “Alas, Mrs. Whitfield was not a Mrs. Jones”

Edmund had an appetite for learning. He kept his mind alert to new knowledge becoming one of the most well informed, self taught men of his time. He was the author of two books, The History Of Aberystruth (1779) and Apparations of Spirits In The Principality Of Wales (1813).

He was known as the Prophet Of The Tranch. In 1793 the Rev Lewis Hopkins wrote to Edmund inviting him to his ordination at Bromyard in Herefordshire the following month. Edmund replied that he would not attend on the fourth of September, the date of the ordination, because of the severe weather. The fourth came and so did the rain. Ministers who attended faced, storms and flooded streams, arriving weary, worn and soaked to the skin. Edmunds letter was read out to the assembled brethren, many of whom expressed the desire to have the old ministers gift.

Edmund died on November 26th 1793 at the age of 91.  His ministry had lasted over 70 years, during which he had made a great name for himself not only in the locality but throughout Wales.

A plaque commemorating him was placed in the church. His grave is in the churchyard to the right of the main entrance.

The minister following Edmund was named Rev Ebenezer Jones, thus fulfilling another of Edmunds prophesies made over 70 years previously.. 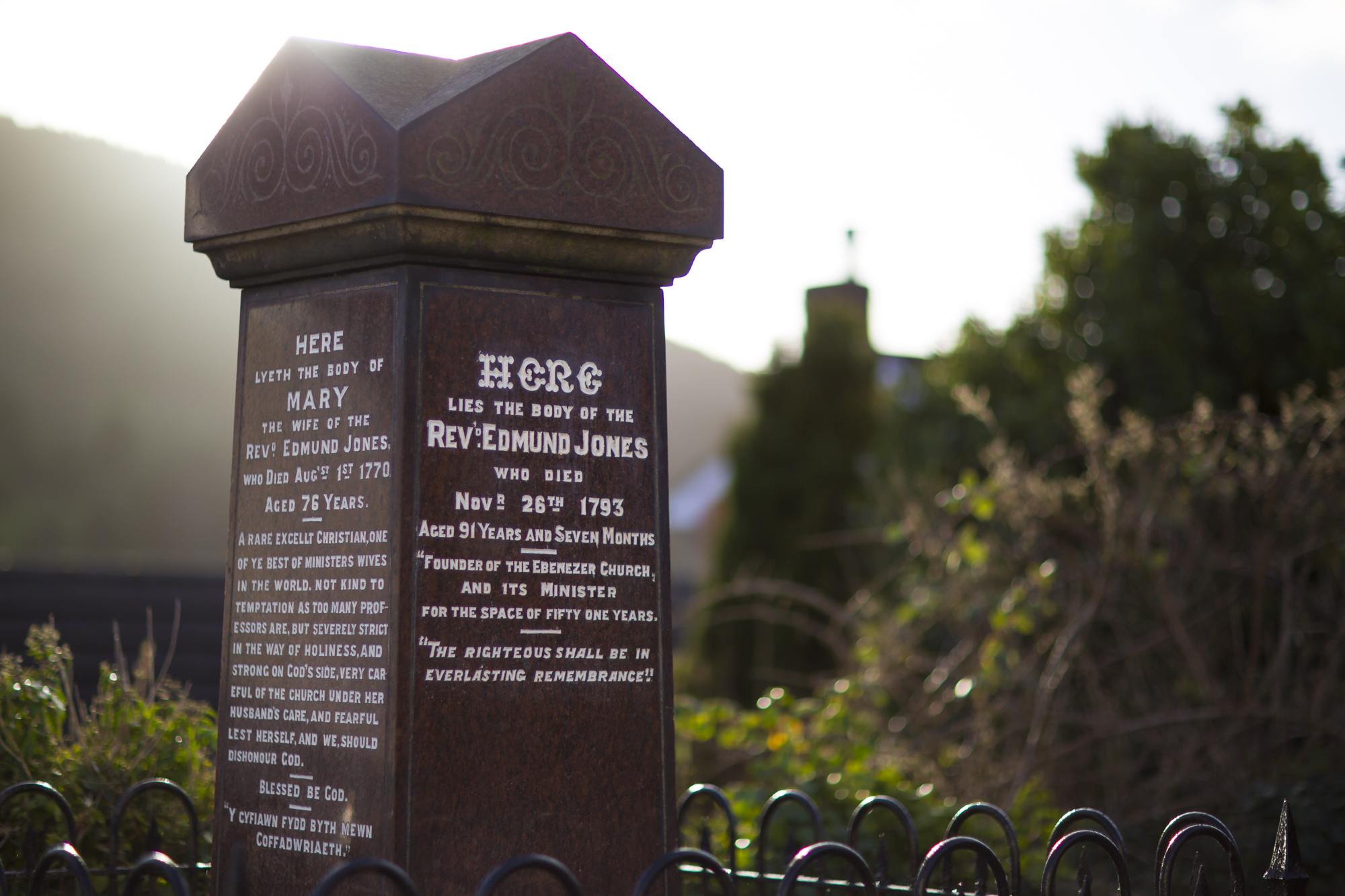 Edmunds Jones’s successor was named Ebenezer. The deacons were on the point of appointing another minister when Ebenezer Jones, who had recently finished college was asked to preach and we are told he took the place by storm.

In 1810 a Sunday School was started. Firstly in a members house and later in the chapel. It grew rapidly and was divided into four classes, Juveniles (both male and female) and adult males and females. By 1827 the Church needed more space. The north wall was demolished and moved out 9 feet, the roof was raised and a new balcony added.

In 1835 the then minister Evan E. Rowland started a day school which ran for 4 years. They taught Writing, Arithmetic, English Grammar and Geography. We are told that up to 100 pupils attended. The reason for it’s closing is not known, but it is assumed to be that he found it difficult to perform his duties as a minister to the churches satisfaction, so he had to close the school.

During the 1860’s, industrialisation brought in labour from outside Wales  who demanded sermons be in English. Many ministers were Welsh speakers only and although agreeing to learn English on appointment, failed to do so. Young people were leaving the church for English speaking churches which caused friction. It was decided at an Ebenezer meeting to have 15 minute sermons in English, but the minister at this time, Rev R. Hughes refused the request and resigned.

After five years without a minister the Rev. J.B. Evans was appointed. He was proficient in both languages. Gas lighting was introduced about this time. Choral singing started to become popular and a young man called William Jones, who was proficient in the Tonic Sol-Fa system was invited to form a class enabling the members to follow music.

In 1878, a large section of land was purchased from the British Iron Company for the sum of £142.5s.0d. This land was to be the churchyard.

In 1890, improvements were made to the Chapel. The old fashioned seating was replaced and the front of the gallery extended and lowered. It was realised that another building was needed for the growing population, so in 1893 a piece of land below the chapel was purchased for £100 to build either a new church or Sunday School. It was decided to repair the Church and build a new Sunday School but plans were delayed because of work closures in the area causing  great financial hardship. Everyday life gradually improved and in 1907 the Sunday School was built.

The Centenary was celebrated in 2007 with the publication of a book on the history of the Sunday School.